After a short night we tried to find the store where we had ordered our "CAN" letters for our main sail. This turned out quite a problem because there were no streets names. Another problem with these streets are they show the speed limit every few miles. After searching the area where we thought the store was, we found it. We received 6 letters for the low price of only £19. Afterwards we drove to ASDA - the Wales "Walmart". We've been at this same store so many times we basically know everyone that works there. 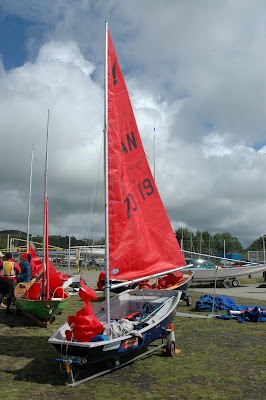 We managed to get the club where everyone was getting ready for the regatta's. We still had to finish quite a bit of things before we could sail. The most important was changing the letters on the main sail and placing numbers on the jib. The one thing that held us back in this was us not knowing whether we were getting new sails. We had to go around asking organizors if we did and finally we got a new set of sails which we placed "CAN" on. On the jib we have the number "22". We were planning to put "turtle wax" on the bottom of the boat but we ran out of time; we had to be ready for 10:55 and it was already 10:30 and the sails were not on the boat yet. 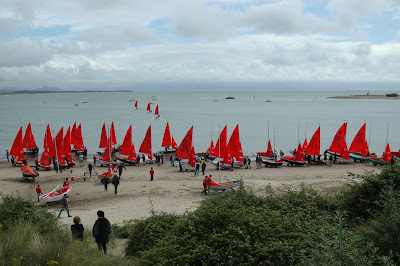 We got dressed into layers and layers of clothing. The wind, blowing at 23 knots, we set sail onto the Irish sea, near the Atlantic ocean. The course was very far away from the beach. It was approximately 30 minutes away sailing very fast. We plained almost the whole way there. We sailed to the stern of the commity boat to check in on the race course. There were 10 RIB's cruising around the course providing security and help for competitors. Additionally, there was a Mothership, which helped out crews in trouble. It was anchored on the leeward side of the course. Les was one of the volunteers on it and had a chance to take the awesome, superb pictures. We then sailed back and forth on the 450 m. start line on which 80 Mirror's started the UK Nationals. 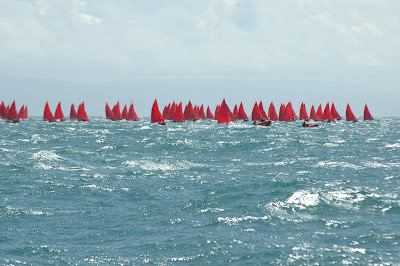 Up until this point it was going smoothly. We started the race fairly horribly becuase of the fact that we had no idea what to do with 80 other boats and a starting line 450 m. long. The sea conditions were extreme. Sailing in this for the first time, overall it wasn't bad. The course consisted of going around one up-wind mark, plaining to the second mark, then down-wind to the third mark and doing a sausage up to the second mark and then once again around the third mark and plaining to the finish line which is 50 m. long. 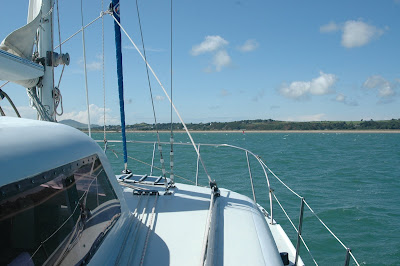 We passed the first and second mark quickly but then got into some trouble. When we were about to gybe going down-wind the wind started to blow fiercly. We managed to gybe but then the boat started to magically go side-ways and almost up-wind. I tugged on the rudder which moved freely. I had no idea what was going on until I saw that the rudder blade snapped and was out of the water. We quickly pulled down the sails and a "RIB" (Rubber Inflatable Boat) came to us and towed us to shore. We came in and saw numerous other Mirrors sailing in with their own problems (many capsizes, 2 other broken rudder blades, 1 broken bom and another few broken centreboards). Overall only 60 Mirror's managed to finish the shortened course. 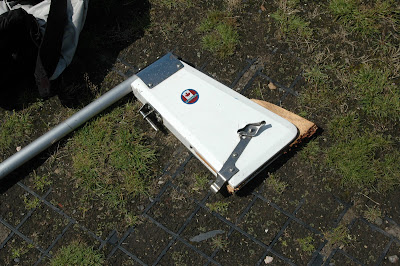 After a few minutes we saw every Mirror returning, so we assumed that they called off the next two races because of the weather. Unfortunately we were not able to finish the first race. We then had to de-rig our boat and search for a new rudder blade, which will hopefully arrive tomorrow morning. Luckily the Australian fleet was kind enough to lend us their rudder blade just in case we needed one. We are grateful that they were able to help us.
We then had a pasta dinner and awards for the first day (they gave a prize for first place on the first day).
Cheers!
Posted by M and M at 5:45:00 PM