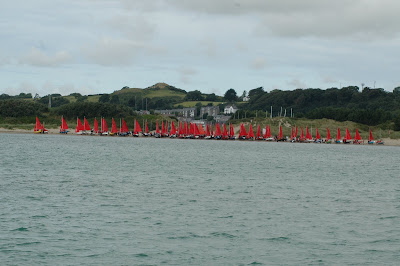 Hey hey. We came to Pwllheli sailing club at around 8:20. Today was a much more normal day, the weather was super. The sun finally came out and the wind came down. We quickly went to our boat and found out that our new rudder blade was there. We quickly put it on. We thanked the Australians for letting us use their spare rudder blade, but we were more comfortable not sailing with theirs. Eventually we got into our sailing gear and went to a morning meeting for safety. They made sure that everyone had a bailer, towing rope, bracelet (elastic band with the crews jib number on it) and to sail to the stern of the commity boat to report. 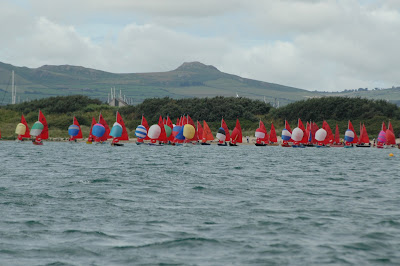 We soon got out onto the water and sailed to the distant course. Today we sailed a total of 3 races. Things were much better than yesterday. We were finally able to improve in each race and learn new techniques. The largest improvement we had was in starts. In some of the pictures you can see that at the second and third races we were at the top of the start line. As well today was the first time we flew the spinnaker in each race. We were able to put it up and down smoothly. 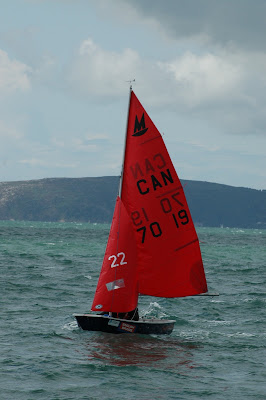 We ran into some trouble in our second race. While on a starboard tack, we were sailing towards the windward mark, we saw a port tack boat sailing towards us. We were on a collision course with jib # 22. I yelled "starboard" twice and Michael yelled "starboard" as well. The boat made no sudden movement so I decided we must tack away to avoid collision. We made the tack and the boat hit us in the stern. We quickly turned around and saw that they had tacked away and we quickly memorized their jib and main sail numbers for a protest. We continued sailing on finishing in a decent, but not amazing, place. 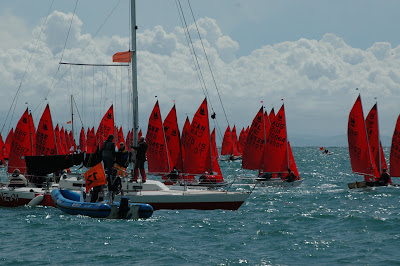 After sailing we quickly brought our boat up the beach (at low tide, it was a pain). We went to the jury desk and filled out a protest form. The jury said that we have to wait till tomorrow afternoon for the results. We also had our bouyancy test completed. There is one little repair. This will be done by the repairman. They will finish the test tomorrow morning. Additionally, we recieved a new rudder blade which will be put on tomorrow. 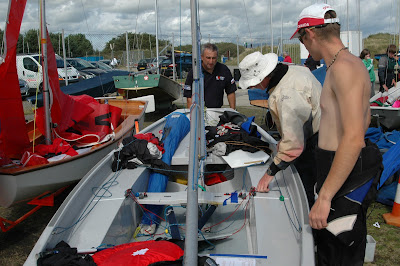 After all of this we had the daily pasta meal, daily awards meeting and a rules clinic. We then fixed some small parts on the Mirror that we found a problem during todays sailing.